PokerStars have released an Apple Mac version of their popular poker software that is set to please over 15 million potential poker players worldwide as they will now have access to a Mac compatible version of PokerStars that will run on the Apple operating platform. The Mac version was worked on for over a year and has finally arrived, a beta version of the game was available since December 2007 but had minor limitations with this new release PokerStars.com have completed the task and pleased Mac users worldwide who now have access to all the features that Windows users were privy to in the past. PokerStars have remained open to US players of poker.

PokerStars have designed the new software especially for the Mac's latest operating system while simultaneously being compatible with Mac OS versions. PokerStars now joins FullTilt Poker as a leader in this area as both now have the option for Mac poker player’s software for their sites.

Get Started Playing Poker at PokerStars for Mac users

To get the latest version of PokerStars for Mac or a Windows PC simply follow the steps below:

Installing the PokerStars Mac or Windows software into the applications folder

You'll see the install file (PokerStarsInstall.exe) on your desktop or in your Downloads folder. Double-click on the file. When the folder appears, drag the PokerStars icon into your Applications folder.

Double-click on the PokerStars icon in your Applications folder. The PokerStars software will now launch on your desktop. 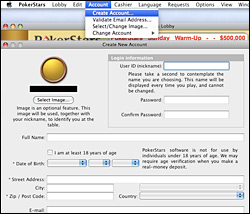 Create your player account- no deposit is needed just create your free PokerStars account. Go to “Account” in the menu bar at the top of the screen, then drop down and select “Create Account”. Fill in the necessary fields on the registration form, and be sure to use a valid e-mail address. They will send the validation code you need to finish creating your account to that e-mail address. 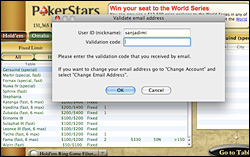 Validate your PokerStars Mac account - Once you have registered, they will send a validation code to the e-mail address you used in Step 4. To validate your account, go to the menu bar at the top of the screen, select “Account”, then select “Validate Email Address”. Check the emails that you have received at the account you registered and enter the code, then press “Validate”. Now you're all set to play!

PokerStars bonus code "STARS600" will get you a 100% first time Deposit Bonus, this is a bonus for new players to PokerStars to offer added incentive to play for real. If you make your first ever real money deposit, PokerStars give you a 100% bonus up to $50. Use the bonus code "STARS600" to begin earning your Poker Stars bonus. To earn this bonus, you will simply need to play on PokerStars and collect the number of Base FPPs equal to 10 times the bonus amount. You will have six months to complete this task.

From time to time, PokerStars makes reload bonuses or reload bonus codes available to existing players, these redeposit bonuses are sent via email, or posted on their website and can at times even be found in the poker software itself in the form of banners or news.