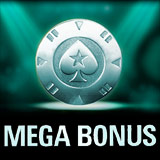 The PokerStars Mega Bonus is only available for a limited time to both new players and existing players that make a deposit with the bonus code during the promo dates.

New players will receive a random PokerStars Mega Bonus up to $100,000 plus a $10 bonus when making their first deposit.

Starting from 27 July until 17 August, players can make a deposit each week to claim their PokerStars Mega Bonus rewards which could be either tournament tickets or a cash prize up to $100,000.

The random mega bonus cash rewards have no wagering requirements and are treated as cash, the reward is issued instantly when players make a deposit.

New players can claim their PokerStars Mega Bonus by making their first deposit during the promotional dates to be eligible for $10 free and a random Mega Bonus reward.

The Mega Bonus reward is issued instantly and all cash prizes are treated as cash with no wagering requirement needed to clear the bonus.

Players can claim this first deposit offer by completing the following steps:

PokerStars Mega Bonus Rewards will either be a tournament ticket to the $100,000 all-in shootout tournament or a random cash prize ranging from $5 up to $100,000.

Every eligible player is guaranteed a Mega Bonus Reward with their deposit and it could be any of the following prizes:

Players can get a PokerStars Mega Bonus Reward each week during the promotional dates even after they have made their first deposit.

Player can claim this offer up to four times between 27 July until 17 August by depositing during each weekly cycle.

Players that win All-in Shootout tournament tickets can use them to play any of the four scheduled events during the promotional dates.

Players can register for the $100,000 All-in Shootouts in the PokerStars lobby by clicking on the Tournaments tab.