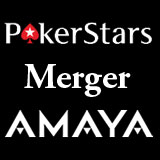 PokerStars Merger Amaya - Rumors of a possible merger with the largest poker site and Amaya Network have been circulating this week.

Amaya Network have responded to the recent 30% increase of trading shares and potential merger with PokerStars.

The merger would see PokerStars entering the regulated US market under a new name or company as a loophole around the bad actor clause. PokerStars have failed to receive approval to operate in New Jersey, Nevada, Delaware and California.

The largest online poker site was suspended for up to 2 years for operating after the 2006 UIGEA came into law, preventing PokerStars from getting any US poker player action since Black Friday.

On 26th May Amaya Network responded to PokerStars Merger Amaya rumors which arose when trading stocks of Amaya suddenly increased by 30% during the week.

The company intends to make no further comment or release regarding current market rumours unless and until such comment is warranted.

The response of Amaya Network does not rule out that discussions for PokerStars Merger Amaya are currently underway, Amaya is waiting for a deal to be signed before making an announcement of the possible merger.

The Rational Group who own PokerStars would be able to get a piece of the US market trading under the Amaya name. Amaya have been approved for a license to operate in New Jersey and have a clean slate to apply for future regulated US poker markets like New York.

The PokerStars NJ license application was denied unless drastic changes took place in the ownership division of the company. PokerStars owner and founder, Isai Scheinberg is still under investigation for violating the 2006 Unlawful Internet Gambling Enforcement Act.