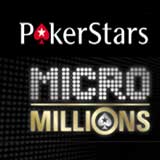 To top off the series PokerStars have added additional incentive to redeposit and reload your pokerstars account by offering a free Micro Millions ticket to players who deposit $20 or more.

Simply Use ‘MICRO” as the Pokerstars bonus code when you deposit $20 or higher to get a free $3.30 tourney ticket.

The Micro Millions II ticket can be used at any of the 27 events that have a $3.30 buy-in or at the special Micro-Millions Main Event mega satellite which will take place just before the tournament begins on July 22, you can use your $3.30 ticket to enter. If you win a seat into the MicroMillions Main Event mega satellite you’ll be playing for a share of the $1 Million guaranteed prize pool, including $150,000 for first.

How to get a Free PokerStars MicroMillions II Ticket?

To get a free $3.30 PokerStars MicroMillions II ticket, simply deposit $20 or higher into your PokerStars account between June 27 07:00 ET and July 10, 23:59 ET and use the Micro Millions bonus code ‘MICRO’.

The free tournament ticket will be instantly added to your account and can be used to directly buy-in to any of the $3.30 events on the PokerStars MicroMillions II schedule, or the mega satellite.

You can find Micro Millions II events and register by opening the PokerStars lobby and clicking ‘Events’ > ‘MicroMillions’.

Use the Pokerstars marketing code when signing up for a new player account to get a 100% first deposit bonus up to $600, then use Pokerstars bonus code STARS600 when making your first

- The PokerStars Micro Millions II bonus is restricted to one ticket only per player.

- Players who make a cashout before making a qualifying deposit will become ineligible for the offer.

- Tickets are non-exchangeable, non-transferable and non-refundable. Unused Micro-Millions tickets will expire on July 22.