The six players representing PokerStars were the last remaining nine players at the final table of the WSOP Main Event. Support them as try earn their titles as the new WSOP* World Champion on the 9th November. Most Players will never get the chance to play against them in the WSOP event BUT here is your chance to challenge the Million Dollar Men in special tournaments and win actual WSOP winnings.  Download PokerStars today and use your PokerStars bonus code: STARS50

There is more than $360,000 in cash prizes in the new PokerStars MDM Freerolls. Enter for free and play in PokerStars daily Round 1 freerolls taking place from 28th September till 17th October, and you could be up against the Million Dollar Men in the final, playing for a large $100,000 as first prize. 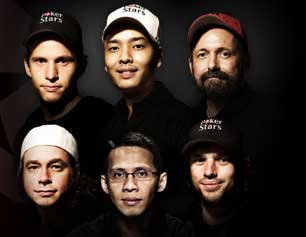 Earn like one of the PokerStars Million Dollar Men

Earn your winnings like the Million Dollar Men earn at the World Series in November, and a chance to win $600,000 worth of prize pools in PokerStars Win a Share tournaments.

PokerStars are running a tournament every Sunday at 16:00 ET from the 5th October which continues six weeks.

Enter all of the tournaments to increase your chance of winning big.

The Million Dollar Men have knocked out more than 6,800 players and are very tough competition. This is the best way to test your skills to see how you would cope at a real WSOP event.

There is so much at stake for you to win huge cash prizes, bounties and the right to brag forever.