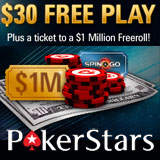 Get a PokerStars Million Freeroll tournament ticket plus $30 freeplay (cash bonuses and spin and go tickets) when making a deposit of only $20 or more!

This is one of PokerStas most generous offers to date, the promotion is targeting new players and coincides with the PokerStars MicroMillion series.

The offer includes a ticket to the PokerStars Million Freeroll which runs every month until the end of November, 2016, play for your share of the million dollar prize pool.

Use the new PokerStars bonus code THIRTY when making a first deposit and get the best value for your starting bankroll.

All new players that have not yet signed up to PokerStars will be eligible for one of the best poker bonuses to date. For a minimum deposit of only $20 you'll get an extra $30 in value in the form of cash bonuses and tournament tickets. The offer also includes a free ticket to the PokerStars Million Freeroll where there is a one million guaranteed prize pool.

Here's what you'll get for a first deposit of only $20:

Use PokerStars bonus code THIRTY on the deposit screen when making a first deposit at PokerStars!

PokerStars are hosting the biggest freeroll tournaments online with a new monthly million freeroll for new players who make their first deposit.

There are two more PokerStars Million Freeroll tournaments scheduled for September and November, 2016. Players with tickets will be able to register for either tournaments as tickets expire after the November tournament.

Take advantage of the deposit bonus offer to get your ticket to the freeroll or qualify through various satellite tournaments running daily on PokerStars.

The PokerStars MicroMillions 12 series of tournaments will be running from July 17-31 with more than ninety scheduled events. Buy-ins are suitable for micro-low stakes players, with decent guaranteed prize pools up for grabs.

Buy-ins start from as low as $0.11, the tournaments generate massive prizes pools due to the large field of registered players in the events. The highlight of the series is the million guaranteed Main Event with at least $100,000 for first place prize for a low buy-in of $22.