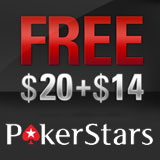 For a limited time PokerStars offer a free $20 bonus plus an extra $14 for players making their first deposit at PokerStars.

The new PokerStars deposit offer is valid until the end of January 2014 and is the biggest sign-up bonus for new players.

Also running this month is the PokerStars January Challenge where players can complete a daily challenge to win entry to a daily $15k all-in shout-out tournament.

Sign-up to PokerStars this January for the best deposit bonus for new players that make their first deposit at the World largest poker site.

Depositing players will get the following:

The $20 Freeplay will be issued within 36 hours of depositing, the tournament ticket for the 100K Privilege Freerolls is valid for 31 days with four daily tournaments adding up to a total of $100,000.

The $14 extra bonus will be issued within 48 hours of depositing, the bonus is released in $1 increments and players can earn 1 FPP per day to release their $1.

Players have fourteen days from bonus issue to earn their daily $1.

The PokerStars Turbo Championship of Online Poker 2014 schedule has been released with 50 guaranteed turbo poker tournaments.