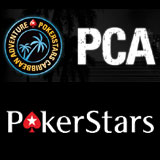 The PokerStars PCA 2014 is scheduled for the 5th-13th January at the Atlantis Resort on Paradise Island in Nassau, The Bahamas.

Win a 2014 PokerStars Caribbean Adventure prize package to poker paradise from as little as 10 FPP or $1.10.

Daily satellite tournaments are running in the PokerStars lobby, use your FPP to play the PCA Mega Path satellites.

The PokerStars WCOOP 2013 series is currently running with more than $40 million in guaranteed prize pools.

Sign-up for a free PokerStars account, players that make their first deposit of at least $20 get an additional $20 PokerStars free play.

Start playing for your seat to the Pokerstars Caribbean Adventure 2014, the 11th edition of the PCA takes place at Atlantis Resort, Bahamas between 5-13 January.

PokerStars are running qualifying tournaments where players can win a 2014 PCA prize package worth more than $15,000, players can buy-in to these satellites starting fro just 10 FPPs.

Prize package includes entry to the 2014 PCA Main Event, Hotel and $1,000 for spending.

Use your FPP to buy-in to the PCA Mega Path satellites which run several times daily, there are 8 rounds to play to qualify for the final satellite buy-in at any level.

Satellite tournaments will run until the end of 2013 giving players plenty of time to qualify.

PCA Mega Path satellites can be located in the lobby by clicking on Events->PCA->FPP Satellites.

New players that sign-up to PokerStars and make a first deposit of more than $20 will get a special PokerStars Free Play $20 bonus plus free tournament ticket for the PokerStars 100K Privilege Freerolls.

To get the PokerStars Free Play $20, players must use the specified bonus code below when making a first deposit on PokerStars.

The PokerStars 100K Privilege Freeroll tournament ticket gives players 31 days access to four daily freerolls with a total of $100,000 in prize pools throughout the month.