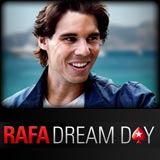 PokerStars Rafa Dream Day is a series of qualifying freerolls and tournaments where players can win a prize package to meet the Spanish tennis Superstar Rafael Nadal.

The winner will win an all expenses paid trip to Spain where they will have diner with Rafael Nadal and play poker against the newly signed PokerStars Sportstar.

Sign-up for a Free PokerStars account, use the marketing code below and get a first deposit bonus up to $600.

Win a trip to Spain to hangout with Rafael Nadal, PokerStars are offering players the chance to win a prize package to meet, greet and play poker with their latest Team Sportstars Pro Rafa.

Qualify for this awesome opportunity by playing the daily freerolls which are free for all players to enter, there are also satellite tournaments with a low buy-in of $1.10. Qualifiers run from 24 the September - 21 October 2012, the final event will award a PokerStars Rafa Dream Day prize package to one lucky player.

Qualify for free in the daily PokerStars freerolls, there are Rafa Dream Day freerolls running five times a day. The winner of each freeroll and the top three players in each $1.10 qualifier will win a seat to the Rafa Dream Day Final.

Register for these PokerStars tournaments in the lobby by clicking on ‘Tourney’ then ‘All’. Players can only play one of the five freerolls per day.

The winner of the Rafa Dream Day Final tournament will win a weekend trip to Spain to meet tennis pro Rafael Nadal on 1-2 December 2012.

Have diner with Rafa Nadal and play in his home poker game and see where he trains, prize also includes: