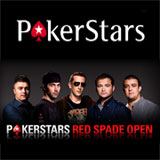 Eliminate any member of Team Pokerstars with a red spade next to their name and get a $100 bounty prize. The first ever event in the PokerStars Red Spade Open series kicks-off this Sunday 31st July 2011.

A new Sunday Major has also been added to the tournament schedule The Pokerstars Sunday Cubed, the tournament takes place weekly and is timed perfectly to suited players from Europe, Asia, Australia and New Zealand.

Challenge the Team PokerStars Pros and win bounty prizes and your share of a million dollars guaranteed in the first ever Poker Stars Red Spade Open. At PokerStars, players can put their poker skills to the test against some of the best players in the World. The Red Spade Open tournament has a buy-in of only $55 with a first place prize guaranteed to be at least $200,000.

Team PokerStars Pro ElkY, Jason Mercier, Maxim Lykov, Eugene Katchalov and Andre Akkari return home with gold, five Pokerstars pros have won WSOP bracelets, do you have what it takes to bust a poker pro and collect a $100 bounty and the rights to brag about it to your friends.

This event can be found in the lobby by clicking on Tourney then Special, players can also win their seat into this event by playing satellite tournaments which start from as little as $1.10. Keep checking for PokerStars Red Spade Open in the near future.

A new tournament has been added to the Sunday Majors, the PokerStars Sunday Cubed. The event is targeted at players based in time zones in Europe, Asia, Australia and New Zealand. The Poker Stars Sunday Cubed tournament features a $50,000 guaranteed prize pool and players can buy-in for $55 including one rebuy and add-on.

Players can register for the event by clicking on ‘Tourney and ‘Regular’ in the PokerStars lobby. Play against Team PokerStars Pros and win your share of the prizes in this new weekly Sunday Major tournament.

Sunday is the best day for playing online poker tournaments at PokerStars, there are several guaranteed tournaments ranging from $11 up to $530,play for your share of a million dollars every week in the Pokerstars Sunday Million for a buy-in of $215.