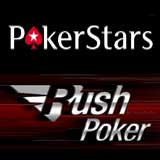 According to several reports online PokerStars is currently working on their own version of Full Tilt Poker's patent pending Rush Poker software. Rush Poker is currently not available to online poker players since Full Tilt Poker shutdown on Black Friday. Formally known as the World Fastest Poker game, Rush Poker was available in cash game and tournament format and was one of the most popular poker variants FullTiltPoker introduced to the poker world.

Expect to see the release of this new adrenalin poker software within the next few months, obviously under a different name with hopefully even more improvements on the original idea of Rush Poker and possibly PokerStars Mobile.

One thing Full Tilt Poker was best known for in the past was their constant improvements to online poker with arguable the best developed poker software in the industry, with new games and the latest technology being introduced. When Full Tilt Poker released Rush Poker in 2010 they had tapped into a new market of adrenalin junkie poker players who want to play more poker hands with alot of action at the tables and the ability to play poker on a mobile phone.

PokerStars and Full Tilt Poker have always had a competitive relationship pre-Black Friday, with FullTilt Poker closed PokerStars plan to release a similar software to Rush Poker. A PokerStars player recently requested a version Rush Poker to be released on PokerStars, a PokerStars representative from the Poker Room Management Team responded by saying:

"PokerStars is developing a fast moving ring games product. We expect it to be available for public beta testing in a few months."

Download PokerStars and wait in anticipation for the release of their new adrenalin poker software. Deposit and get 100% first deposit bonus up to $600.

PokerStars have been behind on technology when it comes to developing mobile poker games or a poker application which would allow players to play poker online from their mobile phone. Full Tilt Rush Poker was also released as a mobile poker application making it easy for players to play poker anywhere. Lets hope they introduce PokerStars mobile soon with the release of their version of Rush Poker equivalent.