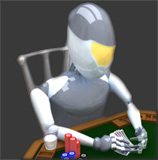 PokerStars Russian Bots have been allegedly colluding and victimizing players on the Pot Limit Omaha tables since October 2014.

The bots have won more than $2.8 million over 18 million hands of Pot Limit Omaha on the PokerStars tables, the news has been kept very quite with no official statement from the popular online poker site.

PokerStars isn't the only affected poker room as the same group of Russians are allegedly responsible for running poker bot software on FullTilt and 888poker.

PokerStars have been quietly investigating the matter for several months and only responded to players who have been victims of the fraud.

This week PokerStars announced that they will be making several changes to 3rd Party software and reviewing the list of PokerStars Allowed Poker Tools.

The PokerStars Russian Bots have affected player losses to the sum of $4.1 million in fraudulent activity on micro and low stake Pot Limit Omaha games. PokerStars have stated that the investigation is ongoing and that most the Russian players have had their accounts closed shortly after the PokerStars bot detection team discovered the activity.

Last week there were more complaints by players regarding the PokerStars Russian Bots as players conducted their own analysis on the suspected accounts playing statistics.

It's suspected that several bots were being used on the same tables and sharing vital hole card information to conclude against regular players. There were approximately 30 known PokerStars Russian Bots accounts that were identified in the investigations particularly usernames: schwein, Oink and goethe.

Schwein, a PokerStars SuperNova Elite player is believed to be the main accounts running the Russian bot operation.

Complaints by affected players received respond emails from PokerStars similar to this:

We are indeed aware of the online discussions alleging a group of accounts to be operating poker bots. Please rest assured that we do not tolerate such activity on PokerStars. We have an extensive arsenal of detection tools in order to ensure that each player is a human being and playing without the use of prohibited programs.

Firstly, we note that the discussions include a list of accounts that are assumed to have been closed due to lack of recent activity. We can confirm that a number of these accounts have indeed been closed for violations of our Terms of Service, but this does not hold true for every account mentioned.

PokerStars players have been complaining that PokerStars have made millions in rake from the PokerStars Russian Bots.

Possibly due to the recent allegations, PokerStars are considering reviewing all the 3rd party applications like poker tools and software. Any software that aids players decisions or used to automate the game-play on PokerStars will be at risk of being banned.

Most poker tools only offer players basic poker strategy and do not aid in real time advice on playing the hand. Some poker tools and software at risk of being added to the PokerStars list of banned poker tools include:

Bovada Poker have completely banned the use of all poker tools because they believe that is gives their USA players an unfair advantage at the poker tables.