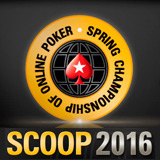 The stake levels Low, Medium and High have the same tournament schedule with the only difference being the buy-in amounts and guaranteed prize pools.

The 2016 PokerStars Spring Championship of Online Poker series runs from 8-22 May and concludes with a Main Event for each stake level with a combined total of $7 million to be won.

These three online poker series fill the gap leading up to the start of the 2016 World Series of Poker.