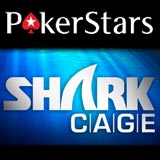 The PokerStars Shark Cage is a brand new poker tv show where the winner get a million dollars for first place prize.

Each heat features an online qualifier against a table of well known PokerStars pros and celebrities which include: Phil Laak, Lex Veldhuis, Jennifer Tilly, Scotty Nguyen, Jason Alexander, Theo Jørgensen and many more.

The Shark Cage will be filmed at different locations on the 2014 European Poker Tour and at the PokerStars Caribbean Adventure 2014.

The final heat will take place at the EPT London and the feature the winners of each heat playing for a million.

Also this March Micro Stakes poker players can win their share of $5 million in the PokerStars MicroMillion 7 series.

PokerStars players can qualify online by finishing in the top 50 places in the Shark Cage qualifier tournaments. Players must then submit an original video on why they should be selected to appear on the poker tv show.

Submission videos should impress the judges and show that the player has a tv personality, with humour and enthusiasm and of course some poker skills.

Upload your 2 minute video to youtube and send the link via email before 23 March to: sharkcage@pokerstars.com

The selected players will get a prize package which includes travel, accommodation and a seat at the PokerStars Shark Cage table.

The next two heats are scheduled for the EPT Grand Final at Monaco and PokerStars is looking for two lucky players to fill the qualifier seats.

Players can get their tournament ticket to the online qualifier tournament by making a deposit with a PokerStars Bonus Code between the 3-14 March 2014.

Poker Shot Clock - Players will only have 30 seconds to make a decision when it's their turn to act. The Poker Shot Clock is a new and controversial topic in the poker scene at the moment and will be introduced to future WPT events.

Bluffing - players are allowed to bluff but if they get caught or if they are bluffed they will be sent to the Shark Cage for a betting round. The other player involved in the bluff will get extra starting chips for the final table.