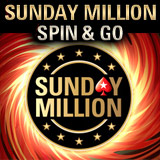 The frequency at which the PokerStars Sunday Million tournament tickets are awarded are 10,000 tickets per every million Spin & Go game played. That's a rate of one ticket paid out for every one hundred games played.

Signup and get a $600 welcome bonus from the world's largest online poker site PokerStars. Deposit $20 and get an additional $20 free, double your first deposit with a bonus.

The fast-paced three player SNG tournament format is great because you have only two opponents to beat to win first place prize. Another bonus is that the games only last a few minutes so you won't need to play for hours to win a ticket like a regular satellite tournament.

Spin & Go prizes and prize pools are random awarded through a popup with whats at stake just before the tournament starts.

Here’s a breakdown of the prizes you can win in the Sunday Million Spin & Go, and the probability of hitting each prize tier.

Below is are the details of the prizes and chances you have to win your ticket to the weekly Sunday Million dollar guaranteed tournament on PokerStars.

The PokerStars Spin and Go to the Sunday Million promotion is only available offer for a limited time, check the Spin & Go lobby of the PokerStars software for availability.

Players can also win their Sunday Million tournament ticket through several satellite tournaments which start from as low as $0.55.

Play your way to the weekly million guaranteed tournament on PokerStars which takes place every Sunday.