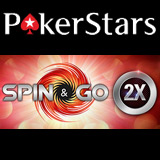 Complete the challenge by earning the required amount of challenge points playing Spin & Go tournaments and win a guaranteed cash prize up to $20,000 everyday.

The promotion runs for a limited-time, don't miss out on your chance to score a daily cash prize on PokerStars.

In celebration of the two year anniversary of the PokerStars Spin & Go game there will be a special Spin & Go 2X Challenge running where players can win an extra $20,000 in cash everyday.

Players are required to opt-in for the challenge and play Spin & Go tournaments to earn points for the promotion. The game features a jackpot prize pool which is randomly generated by the tournament multiplier which could be up to 10,000 times your buy-in amount.

To complete the PokerStars Spin & Go 2X Challenge you'll need to earn 100 challenge points, as an added bonus you'll earn 20 points by playing your first Spin & Go tournament of the day throughout the promotion.

In the PokerStars lobby click on the Challenges window and start the promotion to opt-in and activate it. You can follow the information provided to you on your challenge for points and buy-in requirements for the promotion.

Players can only win one cash prize per day during the promotion dates, cash prizes are paid out instantly in cash with no wagering requirements, amounts range from $1 up to $20,000.

If you complete the PokerStars Spin & Go 2X Challenge you are guaranteed to win a cash prize which is randomly awarded to players based on the payout probabilities of the promotion.