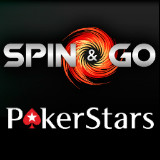 PokerStars Spin & Go is a new jackpot poker game where the winner of the three-player SNG randomly wins up to x1000 their buy-in amount, players in 2nd and 3rd win 10% of the winners payout

With the high volumes of poker traffic at PokerStars this new online poker game offers huge payouts up to $30,000 regularly.

The mobile version of the Spin & Go PokerStars game is compatible for most devices including Android, iPhone and iPad.

New players can get up to $50 in PokerStars Spin & Go tournament tickets by making their first deposit of at least $20, players will randomly win ticket bundles that ranging from $10 - $50.

A similar game is available on the iPoker Network known as Twister Poker SNG Tournaments.

The new PokerStars Spin & Go games are hyper turbo SNG tournaments featuring only three players, as soon the players have registered the random prize pool amount is generated by spinning reels in the center of the table.

The winner of the SNG tournament will get the random prize amount which could be anything from twice to a thousand times the buy-in amount.

Players finishing in second and third place will both get 10% of the random prize pool amount if the jackpot amount is within the top three payout prizes. 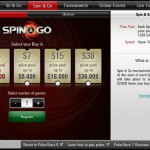 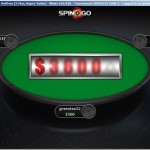 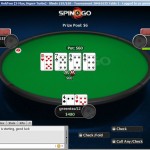 New players can try the PokerStars Spin & Go games and get free tournament tickets for a limited-time with their first deposit of only $20. Make a first deposit before the 26th October 2014 and get a randomly awarded Spin & Go Ticket Bundle worth up to $50.

Players can use their PokerStars Spin & Go Ticket Bundle to play the $1 buy-in Spin & Go tournaments, tickets are issued instantly after making a successful deposit.

Depositing players will also receive $20 in freeplay bonuses plus 30 days access to the PokerStars Privilege Freerolls with $100K in prize pools.

If the Jackpot prize pool is within the highest three prize amounts all players will win their share of the prize. First place wins the jackpot amount and 2nd and 3rd place players both get 10% of the jackpot prize.

At the lowest level of buy-in, the $1 Spin & Go tournaments can offer up to $1,000 random prize pool for the winner and $100 for both second and third.