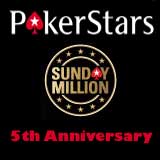 Make your first deposit at PokerStars and get 100% deposit bonus up to a maximum of $600.

There are daily satellite tournaments running where players can win their seat to the event for as little as $1 or buy-in directly for $215.

Register for the Pokerstars Sunday Million by clicking on Tourney then Special in the PokerStars lobby.

The PokerStars Sunday Million satellites are running daily and start from as little as $1 or 100 FPP, players can buy-in directly on the day for $215 or 13,500 FPPs. The winner of the tournament will get a Lamborghini Gallardo LP560-4, there is no cash alternative for this prize, players must accept the prize or it will be given to the runner up.

Deposit at PokerStars using the bonus code STARS600 and qualify for your deposit bonus, to clear the PokerStars bonus players must earn 17 times the deposited amount in VPPs. For every 170 VPP earn a $10 bonus will be released into the players account. Players can make additional deposits within the 90 day period to clear their full bonus.

PokerStars also supports deposits several currencies from around the world, poker bonuses can earned based on the table below.