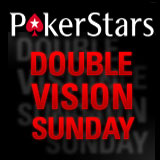 There will be two PokerStars Sunday Million tournaments on 12 February 2012, both tournaments will have a million dollar guaranteed prize pool. Other PokerStars Double Vision Sunday tournaments include the Sunday Warm-Up, Sunday Kickoff and Sunday Storm.

Satellite tournaments are running daily offering players a chance to win a seat for a fraction of the direct buy-in.

Double your deposited amount up to $600 with your first deposit.

Twice the action in the PokerStars Double Vision Sunday promotion on 12 February 2012.

Deposit at PokerStars and get entry to the Pokerstars 100K Depositor Freerolls which consists of four daily $1000 Pokerstars freerolls for 31 days of making a deposit. Qualifying players will receive a special PokerStars tournament ticket to play these online poker freeroll tournaments, when your ticket expires simply make another deposit for another 31 days access.

You can find these Pokerstars freebuys in the lobby by clicking ‘Tourney’ then ‘Freeroll’.

How to get your PokerStars tournament ticket:

PokerStars We Are Poker

Sign-up today for a free Pokerstars account, poker games are available in play money and real money, PokerStars no longer accepts players from the USA.