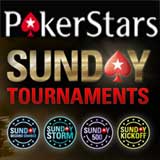 There are daily satellites running where players can win their seats into any of the Pokerstars Sunday tournaments, direct buy-ins start from as little as $11.

Play some of the biggest guaranteed online poker tournaments at PokerStars every Sunday, there are seven events where players can buy-in directly or win their seat from one of the many satellite tournaments running daily. the new edition to the Sunday tournaments is the Sunday Kickoff which starts really early for some but is the perfect event for European poker players.

You can find these events listed in the PokerStars lobby by clicking on the tourney tab.

Pokerstars biggest event of the week is the Sunday Million which has a $1,500,000 guaranteed prize pool, a first place win is worth at least $240,000, buy-in directly for $215 or enter the daily satellite tournaments to get your seat to this massive event.

Take the time to Warm up your poker skills in the PokerStars Sunday Warm-up tournament which features a $750,000 guaranteed prize pool. the tournament takes place early enough for players around the world to take part including Europe. Buy-in directly for $215 or play your way from one of the many satellites running daily.

What better way is there to start your day off other than playing the PokerStars Sunday Kickoff tournament, the event is sure to attract alot of European poker players with it's perfect timing. Buy-in directly for $100 + $9 and play for your share of guaranteed $75,000 prize pool.

PokerStars Sunday Storm is the new name for the 1/4 million tournament, there will be a massive launch party on the 27 March 2011 to celebrate the renaming of this event. Players can buy-in directly for $10 + $1 and play for a guaranteed $300,000 prize pool.

The PokerStars Sunday 500 has the biggest buy-in of $500 + $30 and attract only High Stakes Poker tournament players so the playing field is smaller than the other events. The Sunday 500 tournament guarantees a $500,000 prize pool every Sunday.

The last event of the day offer players another opportunity to win big in a Sunday Poker tournament, The PokerStars Sunday Second Chance has a direct buy-in of $200 + $15 and players can win their share of a guaranteed $200,000 in the prize pool. End your Sunday perfectly by playing this online poker tournament.