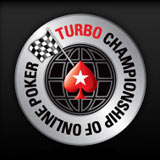 The PokerStars TCOOP 2015 is scheduled to take place between 22 January - 1 February and guarantees over $15 million in prize pools.

What is the TCOOP? it is an abbreviation for the Turbo Championship of Online Poker a series of fifty turbo poker tournaments on PokerStars.

The online poker series offers a wide range of buy-ins to suit all players from micro limits to high roller, there is also a Main Event on the last day of the series which features a $2 million guaranteed prize pool.

New players that have not yet signed up can take advantage of a special offer the PokerStars Bonus Free 20+20 only available to players who make their first deposit before 31st March.

Get ready for the return of the PokerStars TCOOP 2015 series and win your share of more than $15 million spread across fifty action-packed events.

This speeds up game play for players that don't time and patience to spend hours and hours to reach paying positions. Another advantage is that it eliminates nit poker players from folding just about every hand and only playing with premium hands.

The PokerStars Turbo Championship of Online Poker is all about action and building your chip stack in the fastest time.

The TCOOP 2015 schedule includes the popular NL Holdem plus other poker game types like Omaha and Horse. Buy-ins range from a low $7.50 up to $2,100 for high roller events.

Players can also play for their seats to these events by qualifying through the daily satellite tournaments which start from just $0.11.

Register for these tournaments in the PokerStars lobby under the Online Events tab, download the tournament schedule here.

TCOOP Player of the Series

On top of the guaranteed prize pools there will be a Player of the Series leaderboard running where players can win additional prizes based on their performance throughout the series.

The top 250 players will win tournament tickets to the PokerStars SCOOP 2015 series plus a TCOOP Champion's Trophy for the winner.

Don't miss your chance to win big in the PokerStars TCOOP 2015.