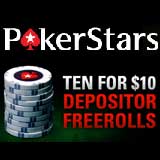 Depositing players will get entry into 10 PokerStars freerolls which have $1000 prize pool, depositors will also qualify for a deposit bonus where they can double their deposited amount up to $600.

What better time is there than now to become a real money poker player on Pokerstars, this is a great incentive with 10 free to enter online poker freeroll tournaments with $1000 prize pools. To qualify for the freeroll tournament tickets players must make the PokerStars minimum deposit of $10 then they can learn how to play Texas Holdem Poker tournaments in these freerolls.

Players must use the Poker Stars bonus code below for the Ten for $10 promotion, deposit now and win your share of the $10,000 in prize pools. This promotion is available to players worldwide including US Players.

Download PokerStars and get 100% first deposit bonus up to $600

Start practicing your poker skills in the Ten for $10 Pokerstars freerolls and win cash playing poker online at PokerStars, depositors will automatically receive freeroll tournament tickets which they can use to enter the next 10 freeroll tournaments. Players must play the freerolls every Thursday and Sunday, tickets expire after 36 days of the date of issue.

Deposit and play two weekly Pokerstars Freerolls just make your first deposit of at least $10 using one of the many deposit methods available, when depositing make sure you enter the PokerStars bonus code "10410" to receive your free poker tournament tickets. you can find the PokerStars freeroll tournaments in the lobby by clicking on 'Tourney' then 'Private' tabs.

When you make your first deposit at PokerStars you can double your deposited amount up to $600, players must clear their deposit bonus within 90 days of depositing and can make up to 3 additional deposits within that period. The PokerStars bonus is released in increments of $10 for every 170 VIP points earned.