One of the major setbacks from over the last few years for PokerStars at least from my perspective has been that the tournaments are way over crowded and take way too long to finish, when you enter a Tourney at PokerStars the numbers initially seem reasonable but sure enough, come the end of extended registration the number of entries is insane and it takes forever to reach the final, what you thought would have taken two hours to complete can take upwards of 6-7 hours should you end up on the final table. At times these extended periods of play are enjoyable however when we are talking about $3-$5 buyins often it is a waste of time unless you finish in the top 3 paying places.

PokerStars must have realized that this time factor for many of their players is an issue so they have concepted a rather ingenious new tournament format that places its emphasis on Time.

The new advent is aptly named:”PokerStars Time Tourneys”, the new Time Tourneys from Poker Stars offer a fast action paced new format of poker tournaments which have a fixed time to end, once the scheduled time of the tourney has been reached the tournament ends and the prize pool is split among the remaining players according to chip stack size.

The new Time Tourneys will offer buy-ins from as low as $1 and tournament playing times will range from as little as 15 minutes all the way up to 180 minutes and will be running around the clock. Get a free PokerStars Time Tourney ticket, simply read more.

To add excitement to the launch PokerStars are giving players a free PokerStars Time Tourney ticket valued at $5.50 to all players who make a deposit of $30 or more using the PokerStars reload bonus code: ‘TIME’ between 19-28 October 2011, to activate your bonus simply Download PokerStars from our site then use the reload bonus code in order to get the free ticket, the free voucher must be used prior to 23.59 ET 28th October 28 and only one ticket may be issued per player account. 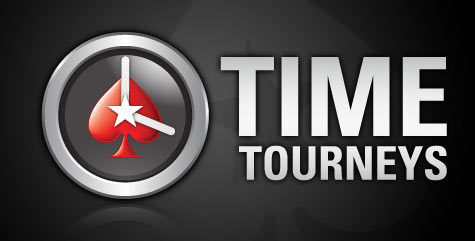 To find the new PokerStars Time-Tourneys simply  click on the ‘Tourney’ tab from the lobby and look for the tournament’s with stopwatch symbol alternatively you can also search for them by typing ‘Time’ into the Tourney Filter.

The new time format tournament has been added as a new Major Saturday Time Tourney known as the Saturday Countdown it will feature a two hour fixed time $22 buyin event that will run weekly at 13:00 ET and carry a GTD of $10,000.

I’m sure for those who value their time and have other things to do will really love the new Time Tourneys at PokerStars, the compressed time format tournament format they have introduced only makes sense, no pun intended.