I was just playing a Mickey Mouse tournament at PokerStars and the servers crashed. I'm not sure of the full extent of the affected events but I did notice that all the satellites to the Sunday 1/4 million are down. Players have been put on break so long - lol, first time I have ever seen PokerStars go down, it's really unusual hence this post.

I sent support a few logs and emails already, not sure of their rulings entirely but its hardly fair that I lost several blinds while others were still connected, I went so far as to reboot my PC and after that didn't succeed I switched ISP's sent the log files etc. Hope they fix the issue soon......

Here are some rare screenshots of a PokerStars server crash during a tournament: 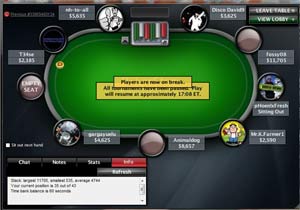 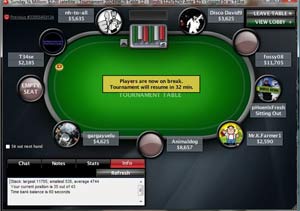 Seems we have passed the 17:08 tournament resumes deadline -lol it's currently 17:12 on their clock I can see other tables in action and am logged into my account yet my table is dead.

Customer support at PokerStars must be under strain right now, taking heaps of abuse.

I will update this post with the “resolve” of the issue; hopefully it will be beneficial to me 😉

Update: I managed to get a seat in the 1/4 million despite my extremely low chip stack after being blind out a few times with no chance to defend. I was even all in on the blinds with a big blind of 600 to my 344 tournament chips holding A-4 with 4 callers all eager to knock me out, yet the ace held up luckily and I just folded every hand after that including pocket Jacks once and made the 24 player cut off for 1st place into PokerStars 1/4 million.