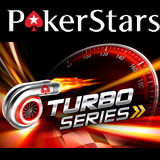 The online poker series features turbo events with buy-ins starting from as low as $11. There are several ways to win tickets to the series including low buy-in Spin & Go tournaments which award tickets as prizes.

The winners of the Twin Turbo Main Events will receive a live poker tournament prize package worth $30,000 to play the PokerStars Players Championship.

Play for your share of over $15 million in prize pools in the PokerStars Turbo Series 2018 which is scheduled to take place daily between 18th February - 4th March, 2018.

There are 74 turbo and hyper-turbo tournaments on the schedule which include the Twin Turbo Main Events which have combined guaranteed prize pools of $3,500,000.

Players can buy-in directly for the series with buy-ins ranging from $11 up to $1,050 to accommodate everyone from low to high stakes levels.

You can also win tournament tickets to the series by playing the daily satellites or Turbo Series Spin & Go tournaments with a buy-in of just $2.75.

Download PokerStars - signup and get a welcome bonus up to $600 with your first deposit.

The winners of the Twin Turbo Main Events which take place on 4th March will both receive a free pass to the PokerStars Players Championship worth $30,000. The upcoming live event takes place in The Bahamas.

There is also an additional pass which can be won in an All-in Shootout on 5th March, the freeroll is open to all players that have played at least on event on the 2018 PokerStars Turbo Series schedule.

Play the Turbo Series Spin & Go tournaments where you can win a selection of tournament tickets to the series based on the buy-in amount.

For just $2.75 you could win free seats to a range of Turbo Series events, including the $1,050 Main Event.

Players can win tickets to the Turbo Series Spin & Go tournaments by playing the daily Hot Turbos tournaments. There is over $40,000 in tournament tickets to be won, the Hot Turbo tournament offers 100 tickets each valued at $2.75 and are awarded randomly.

There are 20 tournament tickets up for grabs for the Main Event, you could win a $55 ticket by playing the daily Turbo Series satellites with a buy-in of just $2.20.

Get a ticket to the Main Event and you can win your share of the million dollar guaranteed prize pool.

If you play any Turbo Series tournament and don't reach paying position you get entry into the second chance freeroll taking place on the next day. These freeroll award an additional $5,000 in tickets to the series and you'll get a second chance to cash in on the series.