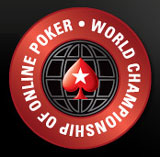 PokerStars WCOOP 2011 is a series of online poker tournaments which features some of the biggest guaranteed prize pools online. The 2011 World Championship of Online Poker has a total of $30 million guaranteed in the series which features 62 events.

Satellite tournaments are running now where players can win their seats for a fraction on the buy-in. The 2011 WCOOP PokerStars tournament series takes place between the 4th- 25th September 2011.

The PokerStars World Championship of Online Poker also known as WCOOP, is the biggest series of online poker tournaments where players can compete for more than $30 million in guaranteed prize pools. There is a total of 62 to tournament events in the online poker series where the winners will be crowned as online poker champions.