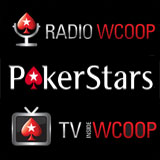 Play for your share of the prizes pools in PokerStars WCOOP 2011 poker series.

The 2011 World Championship of Online Poker features 62 events in the online poker series with a total of $30 million in guaranteed prizes pools, register and play the daily guaranteed tournaments from the 4th- 25th September 2011 on PokerStars.

Players can buy-in directly or win their seat for a fraction of the price playing PokerStars satellites. Make your first deposit and double your deposited amount up to $600.

Listen to WCOOP radio for audio highlights of the daily events, the radio player will auto play during live broadcasts, for past episodes click the play button.

Watch to WCOOP TV, the video player will auto play during live broadcasts, for past episodes click the play button.

Download PokerStars and play the 2011 World Championship of Online Poker.