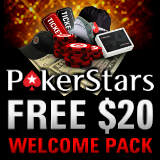 New players can take advantage of the PokerStars Welcome Pack which includes a bunch of extras goodies for players making their first deposit.

This is most generous PokerStars offer for new players that runs for a limited time and valid for new depositing players until 21st September 2014.

Make a first deposit of at least $20 and get the PokerStars Welcome Pack which consists of the following:

Players can also take on the simple Sit & Go Challenge to claim a PokerStars Goody Bag containing a PokerStars Cap, Deck of playing Cards and a Shark Stress Toy.

Get the best value for your first deposit at PokerStars this September, deposit at least $20 and get the PokerStars Welcome Pack with free cash, tournament tickets, merchandise and much more.

Use the PokerStars Privilege Freeroll tickets to play for your share of $100,000 in freeroll prize pools, players get 31 days access to play four daily $1,000 freerolls.

Take on the SNG Challenge, use your first $1 SNG tournament ticket to unlock your next ticket for the following day. Players can claim up to 14 free tournament tickets by repeating the challenge daily for fourteen consecutive days.

Complete the Sit & Go Challenge by playing for seven or more consecutive days from the day of making a first deposit, players must claim at least seven $1 SNG tickets to qualify.

Players that complete the challenge will receive a PokerStars Goody Bag.

Players can claim their free PokerStars Goody Bag by completing the simple Sit & Go Challenge, the package includes the following: 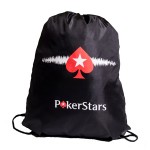 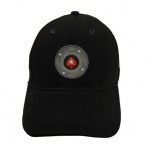 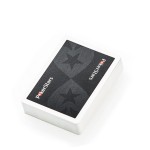 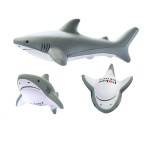 Qualifying players will receive their prizes within 28 days of completing the SNG Challenge on PokerStars.