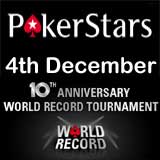 PokerStars are attempting to break their own Guinness World Record by hosting the largest online poker tournament on the 4th December 2011 as part of the PokerStars 10th Anniversary promotions.

The current PokerStars Guinness World Record which still stands was achieved in 2009 when 149,196 players registered in one tournament breaking all previous records set by Full Tilt Poker and PokerStars.

Players can be part of poker history in the latest attempt which hopes to attract more than 150,000 players to register for a low buy-in tournament of only $1 players can play for a $250,000 guaranteed prize pool.

With no US players playing on PokerStars since Black Friday the record breaking attempt will face it's biggest challenge with only countries outside of the USA allowed to participate.

Back in 2009 PokerStars set the record for the most amount of players registered in a single online poker tournament with 149,196 registering for the event. However back then the poker scene was a bit different with the top two online poker rooms PokerStars and Full Tilt Poker using aggressive marketing strategies to keep ahead of the competition.

Earlier in 2009 Full Tilt Poker attempted to beat the PokerStars Guinness World Record on 19th July 2009 with their Record Breaker Tournament which we were promoting back then. In defense of their record PokerStars hosted a tournament on the same day with 65,000 players taking part and set a new record. On the 27th December 2009 PokerStars broke their record again hosting an online poker tournament with 149,196 players registered which still stands today. 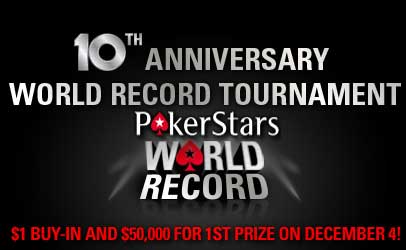 Players are needed to break the Guinness World Record for largest poker tournament on the 4th December 2011. With a low buy-in of $1 and $50,000 for first place prize in this $250k guaranteed tourney, what are you waiting for? register now.

Players can register for this World Record poker event in the PokerStars lobby by clicking on Events then 10th Anniversary & All.

If PokerStars manages to break the record it will certainly show that online poker is still going strong and as popular around World as it was in the USA prior to Black Friday. With no USA players PokerStars have to really depend on the rest of the world and mainly European poker players to make this attempt successful.

This December Pokerstars celebrates it's 10th birthday make sure you don't miss out on all the fantastic promotions including the biggest ever Pokerstars Sunday Million tournament where there is a $10 million guaranteed prize pool plus 100 prize packages to the 2012 PokerStars Caribbean Adventure read more about the PokerStars 10th Anniversary.

You need to https://www.affordable-papers.net/ go through the procedure of practicing and writing your documents.