All PokerStars players can also take part by selecting your favorite to win, anyone who chooses the winner of the PokerStars Rematch will get a chance to play in a $10,000 added PokerStars tournament. Use PokerStars bonus code STARS50 to get 100% deposit bonus up to $50.

Almost a whole year has past since Peter Eastgate won the 2009 WSOP beating Ivan Demidov at the final table. Demidov is almost certain to hold a grudge against his PokerStars team mate Eastgate, now both players will get the chance to re-live the experience online at PokerStars.

Watch the action online as both Pokerstars pros battle it out for charity this week, both players will play head-ups in an exact replica of the WSOP 2008 with the same starting chips and blinds when going into Heads-up play as last years WSOP. Will Peter Eastgate win it again or will Ivan Demidov finally get his revenge?

Fans supporting their favourite Poker pro can join in on all the action for only $11 in one of two tournaments which begins just before the Main Event Rematch.

There will be $10,000 added to the fan tournament of the winning Rematch Pro, select either the Peter Eastgate tournament or Ivan Demidov tournament. You can find the tournament in the PokerStars lobby by clicking on Tourney then Special. All three tournaments can be located there. 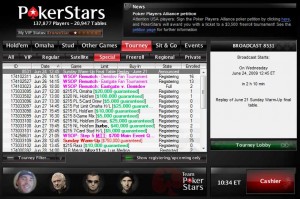 Both tournament will have a standard payout structure based on the buy-in amounts those whose have chosen the correct Rematch winner will split the $10,000 amongst the top 100 places who will all receive an additional $100 on top of their tournament earnings.