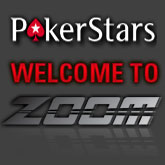 PokerStars Zoom Poker is expected for release as a beta version in March 2012, the new action packed game is PokerStars version of the popular Rush Poker on Full Tilt Poker.

A PokerStars player requested a version Rush Poker for PokerStars and a PokerStars Rep responded "PokerStars is developing a fast moving ring games product. We expect it to be available for public beta testing in a few months."

Not much more information is available about PokerStars Zoom Poker, except that the image on the left now appears in a folder named Blitz (PokerStars/gx/blitz) after a recent PokerStars update.

Sign-up for a free PokerStars account and get a 100% first deposit bonus up to a maximum of $600, minimum deposit is only $10.

Online poker players who enjoyed the new style of fast paced online poker which was released by Full Tilt Poker as Rush Poker, no longer have to wait for the return of FullTilt to start playing Rush Poker. The highly anticipated release of PokerStars Zoom Poker is only a month away from its beta release which is expected to be public in March 2012.

Play PokerStars on your iPhone, iPad or iPod Touch.

PokerStars have also released two additional mobile applications PokerStars TV App for watching all your favorite pokerstars.tv videos and PokerStars Clock App which can be used as a tournament timer for your home poker games.

PokerStars continue their Road to 100 Billion promotion by offering huge cash prizes up to a million dollars for being dealt into a milestone hand. Every five billionth hand dealt leading up to 100 Billion will be celebrated by PokerStars and their players. The next target is 75 Billion and is estimated to be dealt within two weeks from the time of posting.

Play cash games on PokerStars for your chance of a huge payday. PokerStars is the World largest online poker room with over 1.8 million hands dealt every hour. To date PokerStars have dealt more than 70 Billion hands since opening it's doors in 2001.

PokerStars We Are Poker

Download PokerStars - sign-up for free, depositing players get access to $100,000 if Pokerstars freerolls. Your deposit is your free ticket to the PokerStars $100K Depositor Freerolls for 31 days, once your ticket expires simply deposit again for your next 31 day access.