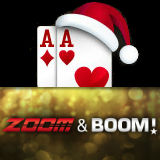 The promotion takes place between 15th-21st December and is part of the PokerStars December Festival.

To claim the prize players are required to share their red aces hand using the PokerStars Boom Hand replayer.

Get dealt the Ace of Hearts & Ace of Diamonds while playing Zoom Poker games and claim your cash daily during the promotional dates.

Players must be seated at any PokerStars Zoom Poker cash game tables either 6-max or 9-max where three or more players are dealt into the hand.

If the player is dealt the two red aces the must also win the hand post-flop, so don't over raise pre-flop you will need at least one other player to tag along and see the flop. The hand must also win the round so you can be more aggressive and possibly overbet on the flop because you don't want your Aces to suck-out either at showdown.

The cash prize is calculated by multiplying the big blind by fifty ie: $0.50/$1 stakes have a Big blind of $1 and will payout the maximum prize of $50.

Those who qualify for the PokerStars Zoom Promotion cash prizes will have the money added to their PokerStars bankroll in just 48 hours.

The Zoom & BOOM promotion is not available on the PokerStars app as the BOOM Hand Replayer is not accessible from the mobile platform.

The PokerStars Sunday Million will guarantee at least a $5 Million prize pool on the 28th December as special edition of the tournament for the Pokerstars December Festival.