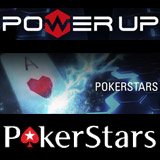 The Power Up PokerStars game has launched on the UK version of the popular online poker software and will be released in other regions around the World soon!

All PokerStars Power Up cards have special powers that make the new poker game exciting and an unique twist to online poker.

The Power Up PokerStars game is played out like a regular Texas Holdem Poker SNG tournament where players are dealt two hole cards and the same starting stack.

Just like any SNG tournament the dealer, big blind and small blind positions change every hand rotating clockwise around the table.

The new element of being dealt Power cards and energy levels makes the strategic card game more interesting and unique.

There are nine PokerStars Power Up Cards each with their own special power which can be used strategically when it's your turn to act. Players are dealt Power Up cards which they keep in their hand till they choose to play it. Power cards must be used at the start of the turn before making your poker action ie: check, bet or raise.

Players are dealt a power cards at the start of the tournament, whenever a player has less than three power cards they will be dealt one Power new card every turn.

Power cards can only be used at the start of your turn to act, before completing your poker action. You can play multiple power cards during your turn one at a time.

The maximum amount of power cards a play can hold at any stage is three. Your power cards will stay in your hand till they are used.

Every power card that a player receives will be different, so you'll never be dealt a copy of a power you already have in your hand. However the Clone card allows players to replicate a card they have just played.

Using Power cards requires energy, each card has a energy cost to use it which is shown on the card on the yellow button.

All players start the game with an energy level of fifteen, every turn players energy levels replenishes by two increments, the maximum energy level is limited to twenty.

If a player does not have enough energy to play a power card they will no be able to play that card until their energy level is equal or higher that the energy cost on the card.

Whenever a player is all-in during a power up game the cards on the board are locked with a red shield and no powers cards can be used.