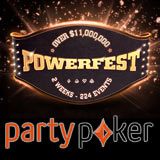 Get ready for POWERFEST 2017, the biggest Party Poker tournament series to date with over $11 million in guaranteed prize pools.

As an added bonus there will be a tournament leaderboard running which pays out tournament tickets to the upcoming PartyPoker Millions to top positions.

Play for your share $11 million in guaranteed prize pools in the POWERFEST 2017 tournament series hosted by PartyPoker.

What can players expect? two weeks of intense poker tournament action with 224 events on the schedule spread across four stake levels from micro to high roller. Each stake level in the series features a Main Event which guarantees a decent prize pool for the buy-in amount.

To get even more value there are satellite tournaments running daily where players can win tournament tickets for a lot less than the direct buy-in amount.

Download the full PartyPoker Powerfest 2017 schedule here for all the events, dates and times.

Throughout the POWERFEST 2017 series there will be tournament leaderboards running with an extra $225,000 in tournament tickets to the PartyPoker millions to be won.

The leaderboards are split into two divisions Featherweight/Middleweight and Heavyweight/High Roller, finish in the top 50 positions to win a tournament tickets.

To rank in the leaderboards players are required to earn learderboard points based on the formula below: