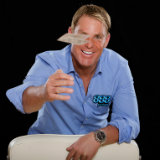 In the first few days of 2015 Shane Warne and Padraig Parkinson leave Team 888 Poker, Warne has represented the brand as the team captain for over 7 years.

The news was released in a short message on the official Shane Warne twitter account stating that he hasn't given up on poker but the partnership with 888poker has ended. Warne is still excited to be participating in the 2015 Aussie Millions which takes place at the Crown Casino in Melbourne, Australia.

Padraig Parkinson 888 poker partnership has also ended, Parkinson had been an ambassador of the brand since the beginning when it was known as Pacific Poker.

Official statements were released on twitter on the 5-6 January by both parties, the famous Australian cricketer is no longer the Team Captain of Team 888poker. Warne will continue his poker career without sponsorship although he is still passionate about playing poker.

Thank you Shane Warne for a remarkable 7 years. It has been a pleasure having you on team #888poker & we wish you best of luck!

Shane Warne still has several partnerships with other brands and posted this hilarious Sportsbetting video ad the day after the big announcement. The video features a $2,000 bet from Sportsbetting that required Warne to eat a bowl of the Worlds hottest curry.

Padraig Parkinson has been an active member of the 888poker community for many years, the Irish poker pro has written many poker articles some of which can be seen on CardPlayer and PaddyPower blog.

I’ve delayed in writing this blog as I could not (and still can’t) find the words to adequately describe the void that will be left with the departure of Padraig Parkinson from Team 888poker. Padraig has been affiliated with 888poker shortly after its inception –back to the Pacific Poker days. His witty character, amazing poker life stories and epicurean state of mind has carved a legacy in the poker world and more specifically at 888poker. Sean - 888 poker community manager

The current list of 888 Poker Ambassadors for 2015 include the following players:

These players will represent 888 poker as ambassadors in live events and online tournaments.