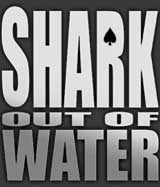 Shark Out of Water is a short film based on the downside of playing poker and shows how gambling addictions and bad runs can affect players personal lives. The new poker movie features cameo roles from profession poker players Phil Hellmuth (UB Poker) and Brad Booth and although the film is only eighteen minutes long, it has created much hype in the film industry and the poker world recently.

The movie was made by poker player Juan Riedinger who has had many ups and down while playing poker and he wanted to capture the true reality of poker with it's constantly changing swings of wins and loses.

The Poker DVD was released last week and hopefully through it's success a full feature film will be released some time soon. Check out the official Shark Out of Water trailer here.

Shark Out of Water

Shark Out of Water Trailer

The film was released last week and the Poker DVD contains lots of special features including video footage of Juan Riedinger (Director) playing heads-up in the casino against the Pokerbrat Phil Hellmuth for the money he made for acting in the short film.

Other DVD extras include Behind-the-Scenes, Director Commentary, Extended/Deleted Scenes, Production Photo Gallery and the Actor's auditions. The Shark Out of Water DVD can be purchased from their website for $9.95 including shipping. Official Website: www.sharkoutofwater.com

The main character Bobby (Matty Finochio) has a serious run of bad luck while playing poker in a casino, his gambling addiction has him borrowing money from a friend Abe (Artine Brown). The film tries to capture poker in a realist manner,  not like most movies with poker scenes where you always see the poker player winning, sometime players do have losing streaks, the game of poker is not always as glamorous as it is interpreted.

Shark Out of Water has already been selected and screened at several film festivals this year.