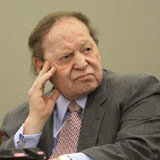 Sheldon Adelson could lose gaming license for Las Vegas Sands casinos due to allegations of ties to organised crime in Macau.

The tables have turned for the multi-billionaire Las Vegas Sands CEO as he is set to face charges in Nevada court which include: bribery and links to criminal activities.

Last Friday judge Elizabeth Gonzalez ruled that the hearing would take place in Nevada, the case has been pending for more than five years.

Adelson will have to provide answers to his ties with Cheung Chi Tai, a junket rep and known triad crime figure that brought high rollers to Adelson's Macau casinos.

The former Macau casino chief executive, Steven Jacobs exposed Adelson's links to bribery and corruption following a wrongful dismissal lawsuit. Jacobs was fired for blocking payments to a Macau lawmaker and lawyer as they breached the US anti-bribery law. Jacobs claimed that Adelson was strongly against Jacobs attempts in breaking ties with the triads.

Sheldon Adelson since accused Jacobs in court of being “delusional” and stated that he was fired for incompetence.

The lawsuit has been pending in Nevada courts since Jacobs dismissal in 2010, after the hearing Judge Elizabeth Gonzalez ruled that the case will best be served in Nevada instead of Macau.

An appeal on Gonzalez’s ruling is expected by Las Vegas Sands however Sheldon Adelson is now under investigation for the relationship with Macau lawmaker and lawyer, Leonel Alves. Adelson used his financial influence by paying $700,000 for lawyer fees so Alves could bribe Macau and Beijing officials.

When Jacobs stopped payments to Alves, Adelson stepped in resolve the relationship with the Alves and fired Jacobs wrongfully.

Adelson will also have to answer question relating to his relationship with Wo Hop To triad leader Cheung Chi Tai. Despise Adelson denying any ties with the leader of one of the major Hong Kong gangs, there is evidence that Cheung is on the Macau casino payroll for bringing High Rollers and lending them cash to gamble.

Robert Goldstein, President and Chief Operating Officer for Las Vegas Sands admitted in earlier court hearings that they were in business with Cheung and had since cut ties with him after his criminal actives were exposed in news reports.

Jacobs response was that Adelson was fully aware of the Cheung history and links to organised crime.

Adelson will also have to answer for having ties to Ng Lap Seng who was a courier for Sands Macau and direct link to the Chinese government. Ng is part of the political advisory body in China known as the Chinese People’s Political Consultative Committee.

During the four day court hearing Adelson responses on the witness stand contradicted the answers given by his own executives. He also insulted Steven Jacobs stating that he was “squealing like a pig to the government”.