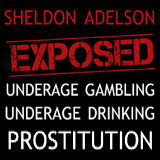 Which pretty much reveals the hypocrisy of Sheldon Adelson and his mission to eradicate online poker in the USA. Adelson has demonized online poker for many years and has even funded coalitions and politicians to fight for his cause.

In the video Tim James goes undercover and reveals how easy it is to gamble & drink underage or even pick up a prostitute at two of Sheldon Adelson casinos: the Venetian and Palazzo.

The teaser video has been released and the full episode will be available this Wednesday, August 19. The non-profit videos are aimed at exposing Sheldon Adelson and his casino operations and comparing them to regulated online poker operations.

The 9 minute long teaser clip does a good job at exposing how easy it is to get away with illegal activities in Sheldon Adelson casinos, the full episode is coming soon.

We love the fact that Tim James isn't afraid to take on one of the richest men in America, provide a well edited video to expose him without needing or expecting any funding to do so.

In this video he had two underage actors enter the casino without having their ID's checked, they mange to play a variety of casino games including poker and cashout their winnings.

Tim James also managed to pickup a prostitute at the casino bar and interviewed her.

"This clip you saw is just a teaser for the episode dropping on Wednesday which will answer a lot more questions. The point of this isn't whether this goes on in other casinos or not. The point is that Sheldon Adelson is "spending whatever it takes" funding politicians to vote his agendas while claiming his reasoning is that physical casinos are the only way to prevent the spread of vice, yet it happens in his casinos every day, and he isn't "spending whatever it takes" and doing media campaigns to stop it.

This keeps free Americans from doing what they want in their homes because he wants to protect his assets, and claiming that his reasoning is to look out for "poor" people and protect people yet this goes on in the businesses he profits from. He is claiming that he's trying to protect the American people from something he's profiting by.

Thousands of Americans are forced to leave the "Land of the free" just so they can work, because they aren't free to do it here, and millions of Americans aren't free to do what they want with their time and money. He is influencing our laws and restricting our freedom for his profit. If you don't have an issue with that, we have nothing to talk about. If you care to see what I'm reporting on, here's just a bit of Adelson's arguments of why he's doing what he's doing. I've given you mine. Hopefully you guys will watch the show, which will be about different topics each episode, but this topic had to be first."  - Tim James

The video was inspired by this interview with Sheldon Adelson where he demonizes online poker when far worse things are going on in his own casino.

One Response to Sheldon Adelson Exposed?