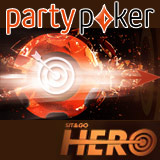 Score up to $50 in tournament tickets by completing the Sit And Go Hero missions on Party Poker this October 2016.

There are seven mission objectives to complete to while playing the new Party Poker Sit & Go Hero tournaments. The prize includes a ticket to play the Caribbean Poker Party Hero special edition tournament where you could win a prize package worth $6,000.

The promotion only last for a few days so make sure that you finish the missions between the promotional dates 24th-30th October.

Get $50 in tournament tickets for completing seven simple Party Poker Sit And Go Hero missions and you could win up to 10,000 times your buy-in while participating in the promotion.

The prize for completing the missions is paid out in four tournament tickets adding up to $50 in value and consists of the following:

Make sure that you opt-in for the mission via the lobby before completing the objectives, this can only be done on the PC client but the missions can be completed on both including the PartyPoker App.

Complete all the objectives below in any order:

Complete the entire list of mission objectives to claim your $50 in Sit And Go Hero tournament tickets as the reward.

Enter a bonus code when signing up to claim your Party Poker welcome bonus for players making their first deposit at PartyPoker.