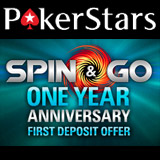 You could be the next millionaire in the Spin n Go Anniversary Promotion running on PokerStars. To date there have been five millionaires within a year since the release of the jackpot SNG games plus a total of 3 billion in cash won on the game.

These simple three player Sit & Go tournaments feature a random prize pool which is announced just before the first cards are dealt. Once you know what the prize pool is going to be you'll need to defeat the two other opponents at the table to claim the prize.

During the PokerStars Spin n Go Anniversary promotion you can win the million dollar prize for a buy-in of only $0.50.

There is a special PokerStars deposit bonus available for a limited time, make a minimum deposit and get PokerStars Spin and Go tournament tickets. Complete one of the daily challenges on PokerStars to win more tickets.

Try your luck at winning the million dollar prize pool in the PokerStars Spin n Go Anniversary promotion. There are special editions of the Spin & Go tournaments running for a limited time where players can turn a buy-in of just $0.50 into a million dollar payday.

The promotion has been added to celebrate the one year anniversary of the PokerStars Spin and Go game.

Get the PokerStars Download and claim your Spin & Go tournament tickets by making a first deposit of at least $20.

A special PokerStars deposit bonus is available until the 1st November where you can get Spin & Go tournament tickets by making a first deposit or reloading your bankroll with the PokerStars bonus code.

Use the bonus code when making a first deposit of $20 and you'll get the following:

All PokerStars Spin and Go tournament tickets will be valid until 30th November, any unused tickets will expire thereafter.

Reload your PokerStars account with at least $10 using the supplied bonus code and get five Spin & Go tickets worth $0.50 each.

Complete one of the three daily challenges to win additional PokerStars Spin and Go tickets for the promotion, the challenges are available between 19 October until 1 November.

Opt-in for the challenge before completing the requirements to claim your Spin & Go tickets.