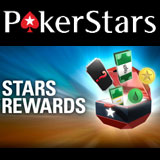 When players earn points and complete the progress bar they'll receive a chest with with random prizes including StarsCoins, cash, tournament tickets and bonuses.

To celebrate the launch of the PokerStars rewards program there is $10 million in cash prizes hidden in 1,000 random chests each containing $1,000 in cash.

This is the new Stars Rewards program which rewards players for playing real money games on Stars products and platforms including: Poker, Casino and bets.

Start earn points now to take advantage of the launch of the PokerStars rewards program and you could win your share of the $10 million in cash.

Every time you complete the progress bar playing real money games you'll receive a chest with prizes including the chance to win a $1,000 in cash.

Players will receive personalized chests that have prizes based on their gameplay on Stars products. This includes: cash, bonuses, tickets or starcoins that can be used to purchase items from the rewards store.

Download PokerStars - get up to $600 in bonuses with your first deposit.

Celebrating the new rewards program PokerStars are adding an extra $10 million in cash prizes. Players can win a $1,000 in cash if they manage to get one of the 1000 random chests containing the special promotional prize.

Players can earn as many chests as they like per day by completing the progress bar, the different chest levels offer a probability of winning one of the random $1,000 chests.

Each time a chest has been claim players will climb levels for even bigger rewards, the point required to complete the progress bar will also increase. See the table below for your chances of winning one on the $1,000 chests.