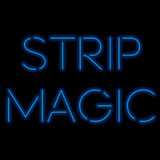 Esfandiari who now represents Ultimate Poker as a Pro on the legal USA poker site, shows us his love for magic and entertaining people.

Having already mastered the game of poker, Esfandiari currently is in first position on the Poker All Time Money list.

Antonio Esfandiari won the 2012 WSOP Big One for One Drop, winning more than $18 million in the million dollar buy-in event.

In Strip Magic, Antonio Esfandiari takes his magic to the streets and performs to an audience on the Vegas Strip. The series of six videos in season one are sponsored by Ultimate Poker which offer regulated USA poker games in Nevada and New Jersey.

Antonio Esfandiari pushes a cigarette through a coin while performing street magic on the Vegas Strip. He also tells us the story of how he got into magic and his fascination to learn card tricks.

Esfandiari wows the crowd with a card trick and tells of his obsession for magic and how he loves to entertain an audience.

Esfandiari reads the crowd when performing a skill which he also uses when playing poker.

Esfandiari explains the rewards of performing magic in front of an audience and his passion for entertaining.

There is talk of a second season on Strip Magic, fans can subscribe to the youtube channel for updates - https://www.youtube.com/user/Ultimatepoker