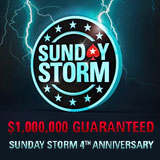 The tournament buy-in will remain the same at only $11 to play for your share of the million, low buy-in with decent guarantee take a trip to value town this Sunday.

Satellites are running where players can qualify for the PokerStars Sunday Storm special edition for only $0.11. Players can also make a deposit to get a free tournament ticket to the Deadline satellite which has 1,000 guaranteed Sunday Storm tickets.

The Sunday Storm PokerStars special edition of the weekly tournament will have an increased prize pool for 4th anniversary on 19, April 2015. Instead of the regular $300K guarantee players will be able to win their share of a million with no change to the buy-in amount.

Register for the Sunday Storm PokerStars tournament in the lobby under the tournaments tab, buy-in directly or get even more value by qualifying through the satellite tournaments.

Invest just $0.10 to qualify for the million dollar guaranteed tournament or buy-in directly to the Deadline Satellite for only $1.10.

Make a PokerStars minimum deposit of at least $10 and get a free tournament ticket to the $1.10 Deadline Satellite where there are 1,000 guaranteed Sunday Storm tickets to be won.