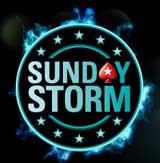 PokerStars Sunday Storm celebrates it's first anniversary this April. There will be a special edition Sunday Storm tournament which will guarantee a million dollar prize pool for a low buy-in of only $11. Eliminate any of the Team PokerStars Pros from the tournament and get a $50 bounty prize.

To make the deal even sweeter, PokerStars are giving away free Sunday Storm tournament tickets worth $11. Players get free tickets when depositing $50 using the PokerStars bonus code below.

Get your seat to the PokerStars Sunday Storm Special Edition for free, and play for your share of the million dollar guaranteed prize pool. Deposit at least $50 for your free tournament ticket worth $11 when using the special Pokerstars bonus code which is valid till 14th April 2012, use the 2012 Pokerstars bonus code STARS600 thereafter.

Players who don't take advantage of the deposit offer can still buy-in to this event for only $11, or win a seat for a fraction of the buy-in by playing one of the many daily satellite tournaments to the event.

This event is located in the PokerStars lobby by clicking on Tourney and then the Special tabs.

PokerStars have released their new poker software that supports Android mobile devices plus iPhones and iPad’s including the new iPad 3 and iPhone 4s. The PokerStars Mobile App is currently only available for UK & Italian poker players, Pokerstars plan to release the mobile poker app this year for players from France, UK, Denmark and Spain.