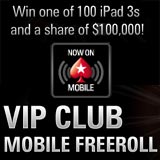 Get your ticket to the PokerStars Mobile Poker App Freeroll and play for your share of $100,000 in cash prizes and the top 100 players will also win an iPad 3 with a special-edition pokerstars cover.

To qualify for the mobile poker freeroll, players must earn 100 VPPs playing on the pokerstars mobile app between 9 July - 15 August 2012.

The VIP Club Mobile Freeroll is scheduled to take place on 19th August, registration is restricted to qualifying players only.

END_OF_DOCUMENT_TOKEN_TO_BE_REPLACED 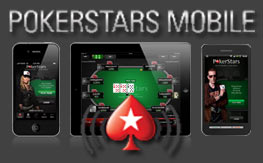 The recent implosion of the iPhone and Android popularity has sparked major growth in the mobile poker app market, the PokerStars App for mobile phones is finally available for download and covers Android and iOS phones and tablets.

The portability of an iPad or iPhone coupled with your favorite poker game makes a winning combination for practicality and ease of use despite lacking a few features present in the full PC version of the software.

PokerStars have after long last developed a platform that supports all the latest Android Tablets and mobile phones as well as iPhones and iPad’s including the latest iPad 3 and iPhone 4s, 5 and 5s. The only negative, quite a major, is that the PokerStars Mobile App is only available to certain countries.

PokerStars Mobile Poker has arrived and is set to stay with recent advancements in its functionality after an iOS app update was released earlier in the week to UK and Italian which added iPad 3 support, hand history, improved filtering and several tweaks and fixes.

PokerStars Zoom Poker games are a great addition to the app, allowing players to get more action with no waiting time between hands.

PokerStars Clock : a poker tournament manger with full range of poker tools, including a tournament clock and customizable options.

END_OF_DOCUMENT_TOKEN_TO_BE_REPLACED 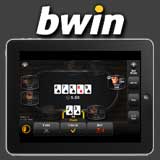 Bwin Poker iPad app is now available for download, allowing players to play online poker on their iPad anytime, anywhere. BwinPoker seems to be far ahead of their competition with their poker apps also being available for Android and iPhone.

END_OF_DOCUMENT_TOKEN_TO_BE_REPLACED 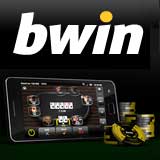 BwinPoker are giving away 10 iPad2 and 100 x €100 cash prizes in their latest Bwin Poker App promotion, the prizes will be raffled to any player who simply plays on the iPhone or Android app between 28 March until 10 April 2012.

END_OF_DOCUMENT_TOKEN_TO_BE_REPLACED

Bwin Poker is now available for mobile phones with the latest release of their Android Poker App and iPhone Poker App, players can now play poker online from their mobile, iPhone or smartphone with the newly created Bwin Poker App.

Now poker players can squeeze in a few poker hands while on the move.