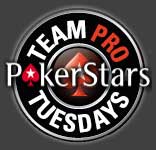 Every Tuesday Poker Stars players can play against the Team PokerStars Pro players, play ring games and tournaments against some of the top poker pros in the world which includes World Series Of Poker main event winners Joe Cada (WSOP 2009) and Peter Eastgate (WSOP 2008). PokerStars have added two tournaments to their Tuesday tourney schedule called Outlast the Pro, win extra cash for outlasting Team PokerStars players. $1,000 will be added to the tournaments for players who outlast all the PokerStars pros.

PokerStars have the most poker pros in their team representing the PokerStars name, these players have all made a big impression on the poker world. Here is your chance to play against some of the best poker players in the world. Every Tuesday Team PokerStars will be playing poker online at the following times 12:00 - 15:00 and 19:00 - 22:00 Eastern Time.

PokerStars Pros Daniel Negreanu, Joe Cada, Peter Eastgate, Chris Moneymaker and Bertrand Grospellier who won the 2009 PCA High Roller event are amongst the many top poker players expected to be playing regularly every Tuesday.  PokerStars Team players will be playing tournaments and cash games at all different stakes, game types and buy-in amounts.

Chat with the team players and watch from the rail or play against them and take their money and more than that the right to brag about it to all your friends.

Enter the two weekly Outlast the Pro tournaments on PokerStars and win your share of the $1,000 added for outlasting all the Team PokerStars players. They are some of the toughest poker opponents in the world and a great way to test your poker skills and survival strategy.