No Limit Texas Holdem is still the most popular poker game played these days, although Pot Limit Omaha can be just as exciting and profitable to play. Learning to play other poker games can help improve your overall poker skills

Omaha Poker is similar to Texas Hold em except that players are dealt four hole cards instead of two. Players must make the best hand using two of their hole cards and three of the community cards when showdown is reached. Omaha has the same betting rounds preflop, flop, turn and river. The most popular Omaha game is Pot Limit Omaha.

In Texas Hold'em it's very common for players to raise preflop when dealt big pocket pairs like JJ QQ KK or AA. In fact it's a very important part of the game in order to eliminate the amount of players and increase your odds of winning that hand. Most cases the big pairs will win if played correctly, hitting a set (three of a kind) is a very strong hand in Texas Holdem provided there are no flush or straight draws on the board. Texas Hold em has a lot of pre-flop action to win, Omaha is a game which has many outs.

In Omaha having big pocket pairs pre-flop might seem good but will have less value if the player does not improve his hand before showdown. Even when players hit a set (three of a kind) on the flop it can still easily be beat by a Straight, Flush or a Full House. 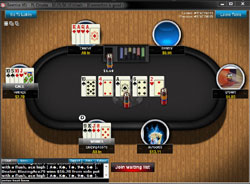 In this example we can see two players have both hit a set (A-A-A and 10-10-10) on the flop and are willing to bet pot all they way thinking they have the best hand. On the turn the third player hits the nut flush, while a flush can still be beat if the board pairs and one of the other two players hit a Full House or Four of a Kind on the River in this case it doesn't happen and player with the flush wins a big pot.

While all of the players played this hand correctly being almost impossible to fold, observing their outs and playing more passively could have saved them from a big loss, a simple 2 and 3 of spades could have beaten their three of a kind hands.

Straights and Three of a Kind often don't hold up in Omaha when their are many players involved in the hand, Omaha is a game with may outs, knowing your outs can drastically improve your Texas Hold em skills.

Things to look out for when playing big pairs, sets or straights in Omaha and Texas Hold'em:

To learn all the poker games you might want to try playing a H.O.R.S.E tournament which brings all the games together by switching between game types after each round. A good poker player is one that can master all these games.