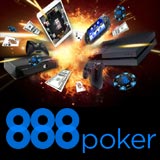 The Big Bang is a cash game leaderboard promotion with more than $50,000 in prizes to be won starting from 6th January 2014.

Players earn points for the leaderboards based on their poker hand ranking of the first 150 hand they are dealt everyday.

That's not all, tournament players can enjoy the extension on the 888Poker Winter Giveaway freeroll until the 5th February, same rules apply for earning tournament tickets.

Play cash games on 888poker to rank in the Big Bang leaderboards, unlike most cash game promotions players don't need to spend the most money to win.

Points are instead calculated by players hand ranking on their first 150 hands dealt everyday, the higher your hand ranks the more leaderboard points you will earn.

The Big Bang leaderboards are split up per country: UK, Germany, Canada, Australia, Russia and the rest of the World.

The weekly country leaderboards run on the following dates:

Players can earn Big Bang Leaderboard Points for the weekly country leaderboard based on their Poker Hand Rankings listed below, players must hit the hand post flop or at showdown.

The top 350 players on each weekly leaderboard will all win cash prizes and entry to the Big Bang Grand Final Leaderboard.

Winners will be contacted within 72 hours of the end of the promotion, players will receive coupon codes for the 888poker shop, all prizes may take up to 60 days for delivery.