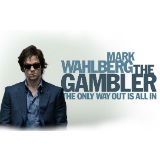 The Gambler 2014 film is set to be released on December 19, the remake of the 1974 classic film features: Mark Wahlberg, Brie Larson, John Goodman, Michael Kenneth Williams and Jessica Lange.

The American crime drama features Mark Wahlberg as Jim Bennett, a college professor who has another life playing high-stakes casino games (Blackjack & Roulette) and runs into trouble with a loan shark.

The only way to repay his loan to his gangster loan shark is to take an even bigger risk to survive. Amongst all the turmoil, Bennett has a love affair with one of his college students who discovers the double life he is living.

Mark Wahlberg The Gambler Movie premiered at the 2014 American Film Institute Festival on November 10 and the official released date in the USA is scheduled for December 19.

The movie was filmed in Downtown Los Angeles and California by Director Rupert Wyatt. The Gambler 2014 is a potential contender for an Oscar Award.

Jim Bennett is a risk taker. Both an English professor and a high-stakes gambler, Bennett bets it all when he borrows from a gangster and offers his own life as collateral.

Always one step ahead, Bennett pits his creditor against the operator of a gambling ring and leaves his dysfunctional relationship with his wealthy mother in his wake. He plays both sides, immersing himself in an illicit, underground world while garnering the attention of Frank, a loan shark with a paternal interest in Bennett's future.

As his relationship with a student deepens, Bennett must take the ultimate risk for a second chance... - Paramount Pictures