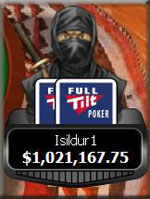 Isildur1 was on a winning streak for about a month in November peaking to more than 5 million dollars profit from playing high stakes poker games on Full Tilt Poker against Tom “durrrr” Dwan, Brian Townsend and David Benyamine. Around the 24th November his bankroll was falling into the negative.

He then started to make a recovery until he played Brian Hastings and lost more than four million dollars playing $500/$1,000 Pot Limit Omaha which is the most amount of money ever won playing poker online in one session. This put Isildur1's bankroll to more than two million dollars in the red till he played Durrrr and Brian Townsend where he recover by winning more than one and a half million dollars against his opponents.

Isildur1's bankroll then took a huge fall down to $-2,139,064 after playing Brian Townsend and Brian Hastings on Tuesday. Will Isildur1 recover from this huge loss or will he just disappear unnamed without anyone knowing who he is.

Full Tilt Poker players can watch these high stakes poker games from the rail, download Full Tilt Poker and watch all the action online. The biggest pot in online poker was won by Patrik Antonius playing against Isildur1 in a hand with $1,356,946.50 in the pot.